Please enter your email and check your inbox.

When people think The University of Mississippi, the Grove is usually one of the first thoughts that come to mind. The evolution of the “Grove tent set up” tailgating experience did not happen over night however. Like many other large southern gatherings, the history is just as meaningful as the ritual.

For years fans have tailgated in the Grove, but a Grove tent set up was not always to be found. Alumni from a few generations back can remember a day when tailgates used to be bumper-to-bumper Ford trucks instead of Grove tents. Fans would pack the campus with cars, enjoying the Saturday picnic-style festivities.

In 1983 Billy Brewer was named the head football coach at Mississippi. He was searching for a way to allow his team to experience the pregame Grove pageantry of Red and Blue. He decided that the football team should walk through the Grove to Vaught-Hemingway stadium two hours before kickoff every home game. The Rebel Fans loved it! Tailgating spots near the football players’ pregame walk quickly became some of the best spots to park your car in the Grove. 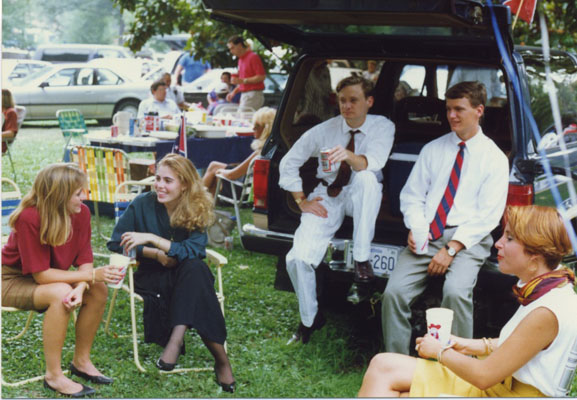 The week of the Arkansas game in 1991 started a new era of Mississippi Grove tailgating. University officials were forced to close the Grove to vehicles because of heavy rain on Thursday and Friday of that week. Fans were forced to buy a pair boots and carry their chairs, tables, and coolers to the Grove, instead of driving to it. This picnic style tailgate evolved throughout the season into one of the largest outdoor cocktail parties in the South. The fans enjoyed the beauty of the Grove without cars and decided to never look back. From then on, the Grove was no longer a parking lot for fans, now a place where Grove tents were setup next to each other.

The phrase Grove tent set up began the following season. Canopy “Grove tents” began to be spotted at more and more Grove tailgates. An Ole Miss grove tent set up was referred to as the setting up of a canopy tent, table, chairs, and a cooler. In a short amount of time the Oxford, Mississippi Grove tailgating experience was recognized throughout the country as one of the most unique college football tailgates. In 1998 the “Walk of Champions” arch was erected on the Union side of the Grove. It was named and donated to the University by the 1962 National Championship 10-0 Ole Miss football team. Later that year, the Ole Miss Alumni Association founded the ‘Grove Society’ to preserve and enrich the beauty of the Grove.

In 2001, one of sport’s most famous Sons of the South brought a winning attitude back to The University of Mississippi. After taking the Rebels 69 yards for a last minute touchdown and an upset against Alabama, Eli Manning’s Ole Miss inheritance was underway. Manning and the Rebels that year generated buzz around Oxford and an interest in Grove tailgating. The Eli Manning years put the Rebels back on the map. The rebel faithful are forever grateful for Eli, Archie and, all the Mannings that have made Mississippi a better place.

Public figures such as Matthew McConaughey, Katie Perry, and Mitt Romney have been spotted “Groving” in recent years. Today people from around the country visit Oxford, Mississippi on game days to experience the Grove. The Alabama/Mississippi game last season brought over 150,000 tailgaters to the Grove. Many attendees of that weekend said it was the “largest outdoor cocktail party ever in the state of Mississippi". And we all remember Katy Perry at College Gameday in the Grove. With teams like Texas A&M, Arkansas, and LSU on the 2015 football schedule, Oxford Grove tailgating should continue to give people an experience that lasts a lifetime!

Sprit of The Grove

What is the Grove? Today most sports fan have there own unique vision of this place. Each person who has been fortunate enough to tailgate in the Grove understands that it is about much more than just a place people go to before a football game.

“It’s Mardi Gras for the state of Mississippi.” On Friday nights the Oxford Square is invaded by a well-groomed bunch of folks that rarely miss the chance to yell “ARE YOU READY?”. The bourbon flows and the music beats to the thump of the delta blues guitar. Sorority groups walk along the streets and make every warm-blooded male’s heart skip a beat. The midnight sun shines bright on Oxford, Mississippi Friday nights before a day in the Grove.

Sun’s up, its Saturday and Oxford is full of life. Bloody Marys, Mimosas, and coffee are the morning usuals. Tents become occupied, College Game day is turned on, and tables are filled with Grove hors d’oeuvres. Students wake up in unfamiliar places, recollect their nights with each other, and began another day of festivities that will one day be lifelong stories.

The team marches. Fans crowd the Walk of Champions to watch the football team on its way to Vaught-Hemingway Stadium. Everybody alters to the attitude of an 8-year-old boy cheering and high-fiving their favorite Mississippi football players as they walk by. The team touches down in the stadium. Loyal Rebels head to the game while loyal drinkers head back to their Grove tent for another Makers and Coke. HOTTY TODDY GOSH ALMIGHTY.

Games over. College couples go home, single greeks go to the bars, and older alumni groups go back to their Grove Tent to recite old stories of when they were college students. They soak in the atmosphere and think about how much fun they had today in the Grove. Laughter, buzzed-thoughts, and tears are shared. Freshman to Senior, marriage to mortgage, kids to grandkids, pain and pleasure, blood and treasure. Life’s journey was well traveled, but its compass will forever point towards the Oxford Grove. The men stare at groups of college girls that walk by. Wives are envious while reminiscing on how that used to be them. Oh, how the game has changed since the age of 21 they think. Experiencing the Grove allows people of all ages to escape back to their college youth. The Grove wasn’t born, nor will it ever die. It isn’t made of earth, water, or sky. It’s made of the souls of the people who call Ole Miss home.